Karkathians are large intelligent creatures who prefer to live in mountain caverns. They are most prevalent in the Perilous Peaks, where the mountain ranges contain famously large cavern systems. Here they live in groups called prides with a generally higher ratio of females to males. Each pride selects the strongest male and female as their king and queen, and this diarchy determines what is best for the rest of their group.

[wcm_restrict plans=”patreon”]
The Karkathians, as a whole, are a relatively peaceful species. Even though it is fairly common among the prides to have challenges for a new king or queen, it is handled in an orderly fashion as a contest of strength. It is unheard of for the Karkathian prides to go to war amongst themselves. Once a pride has claimed a section of the caverns as their own, there is never a dispute or challenge over its ownership from the others.
The Karkathians have always gotten along with most of the other intelligent societies of their region. But recently the Greyskrulls have begun to make their way north from the Badlands and into the caverns of the Perilous Peaks. It did not take long for a strong distaste of these new violent neighbors to quickly become apparent.
Physical Characteristics
The Karkathians are very similar to kangaroos in shape and size, with horns on their snouts and going down the back of their heads and necks. They carve faces on their horns to instill fear, by intimidation rather than violence, in those who would try to attack them. The Karkathians began the widespread rumor that the faces on their horns belong to the trapped souls of those they have slain in battles. Lining the underside of these creatures from their throat to their tail is a tufted skin both strong and incredibly beautiful.
The large claws at the end of their feet are razor-sharp, and are capable of inflicting devastating blows. Each Karkathian has two faces. The smaller of the two is on the end of their snout, and looks more human while the other is much more animalistic.
[/wcm_restrict]

Photos by Keith May of May Photo 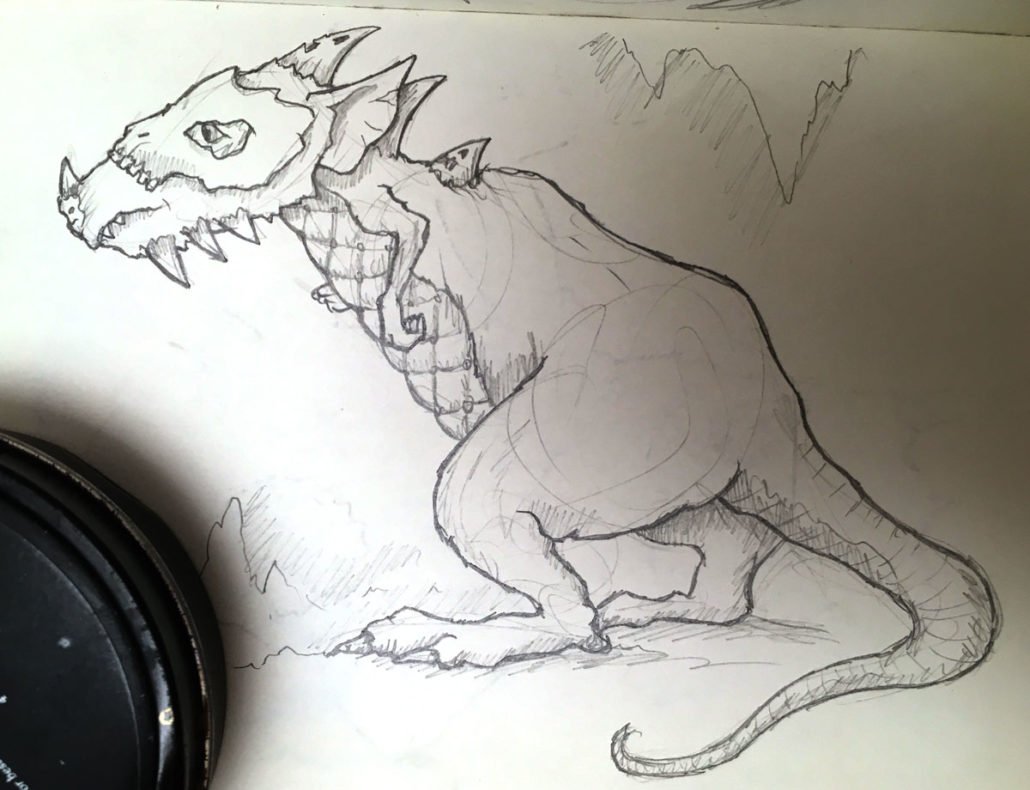 [wcm_restrict plans=”patreon”]
I created Doralt last year. From the moment I started sculpting him, he has become one of my favorite pieces I have done.

Above is the original concept sketch from my moleskine sketchbook. There are many little pieces going on here that were directly influenced by other artists.
The chest of Doralt is supposed to look like tufted upholstery. This was influenced by Greg Simkins who’s  pop-surrealism is hands down my favorite contemporary artist. Similar fabric textures can be seen in some of his paintings that Kerry and I got to see in a solo exhibit of his in NY, quite a few years ago.
The faces carved in the horns were inspired by faces that were in these ghost paintings by Matthew Ryan Sharp from a 2009 show that I curated at Alcove Gallery in Atlanta. Something about those faces made me start putting similar shapes into different objects.
The bone mask that he wears can be seen throughout many pieces that I create. In Revlio it helps creatures navigate the Forest of the Dead avoiding the undead who lurk within. In real life there is different symbolism there with the having to wear the day-job mask which truly hides my personal artistic identity. For a while I had a very hard time with the idea that the art and business could live together.
When I sculpted the original mounted head I didn’t truly think through what the rest of their bodies would look like. And the sculpt had these tiny arms. When I decided to sketch it out, I thought they would be more kangaroo-like in stature.
Doralt is still in my collection as he did not sell when doing the con circuit. He is most likely retired to my studio unless I really need to fill a wall at an upcoming show.
[/wcm_restrict]